Why Hierarchies are Hard

From vector to unordered_map, container types serve to separate the details of the container from the data they maintain. C++ developers are no stranger to this valuable tenet. However, when it comes to hierarchical containers, we find ourselves without a generic go-to solution. At best, we’ll roll our own custom type for the specific use-case. At worst, that implementation embeds the hierarchy into the data itself. Who hasn’t seen something like the below, only to get nerd sniped in all the wrong ways as they have to maintain it?

What does it look like to enforce that your hierarchy is actually a hierarchy? What’s to stop a user of your container type from setting _first_child to _parent? How many squirrelly traversals do you need to do to assert that the user hasn’t embedded a cycle somewhere, somehow? The policing of such a structure becomes too expensive, and users are left to themselves to make sure they get things right. In the end, they are required to maintain the container’s consistency, which can be more expensive than maintaining the data itself. If a container type cannot maintain its own internal consistency, it fails a basic requirement of these types.

Easy Hierarchies: Beads on a String

Let’s go back to childhood for a minute. Imagine if you will a bead with a hole through it and a bit of string that is tied to itself to form a loop: 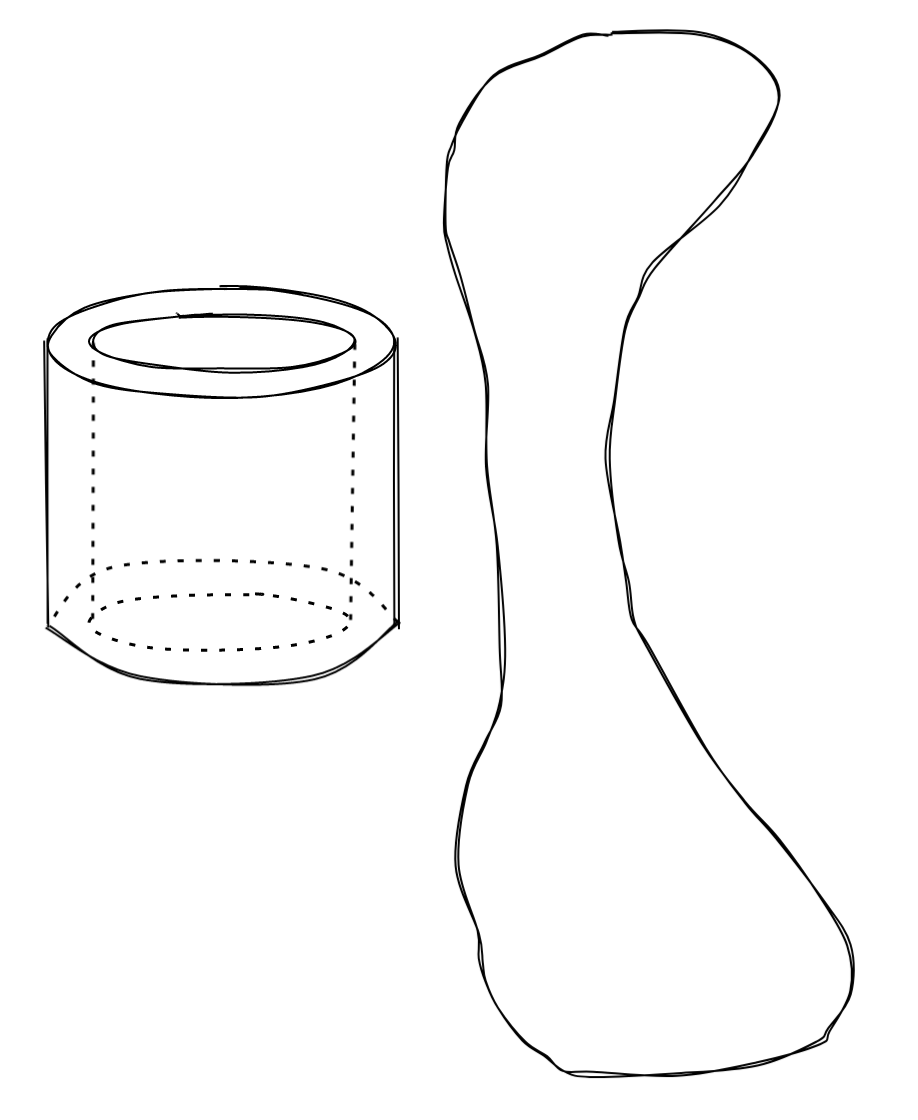 It’s not hard to feed the string through the bead, giving you two loops of string that come out either side of the bead:

Feeding the string through another bead is easy enough, giving us the beginnings of some kind of necklace:

Now let’s add a third, but this time we feed it between the two beads we have. Since we have only been feeding the string through a bead once, we’ll keep following that rule: 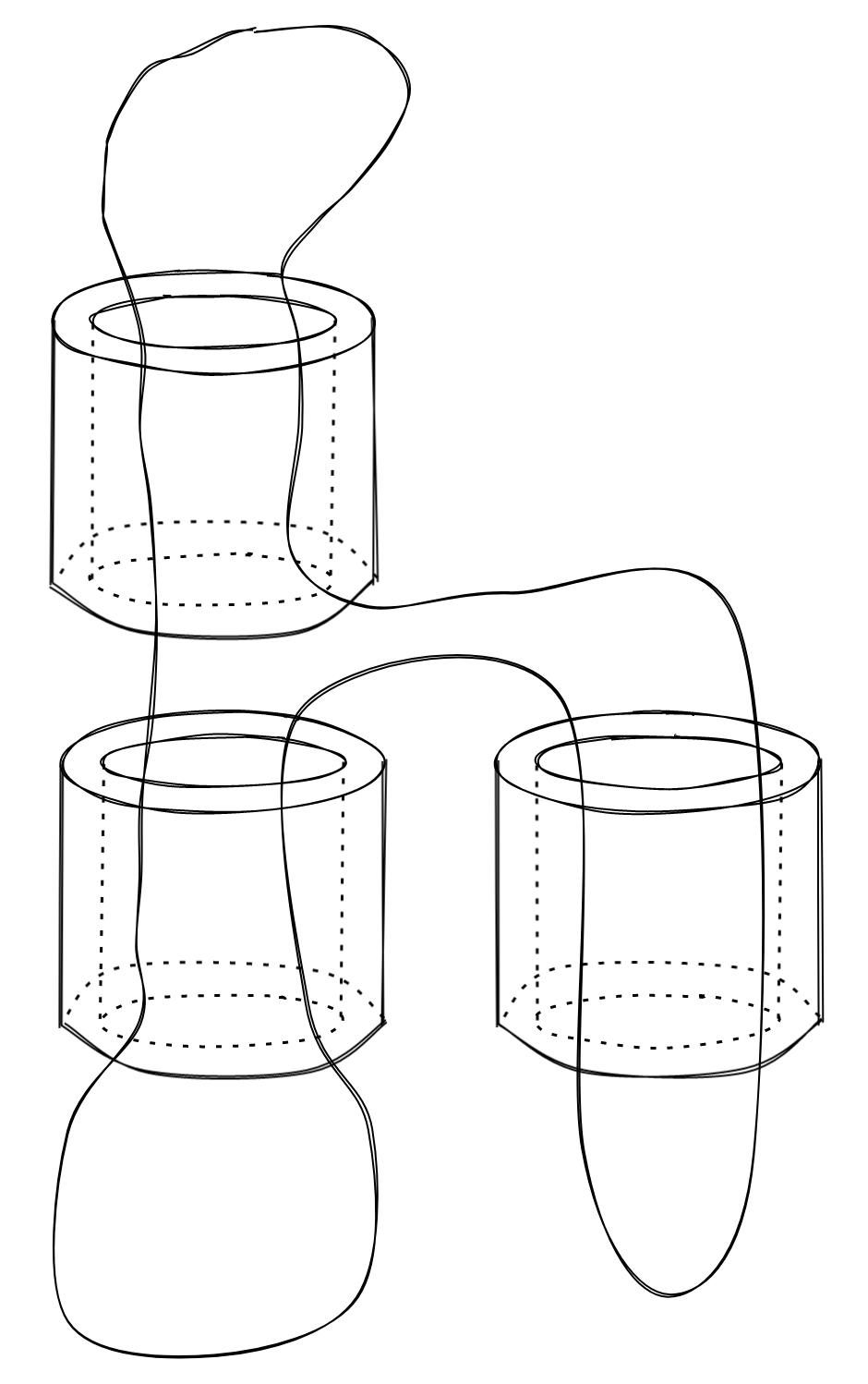 It turns out, if you follow the rule that the string can only be fed once through a bead, you cannot help but make a hierarchy. No matter where you add a new bead, you still have a hierarchy: 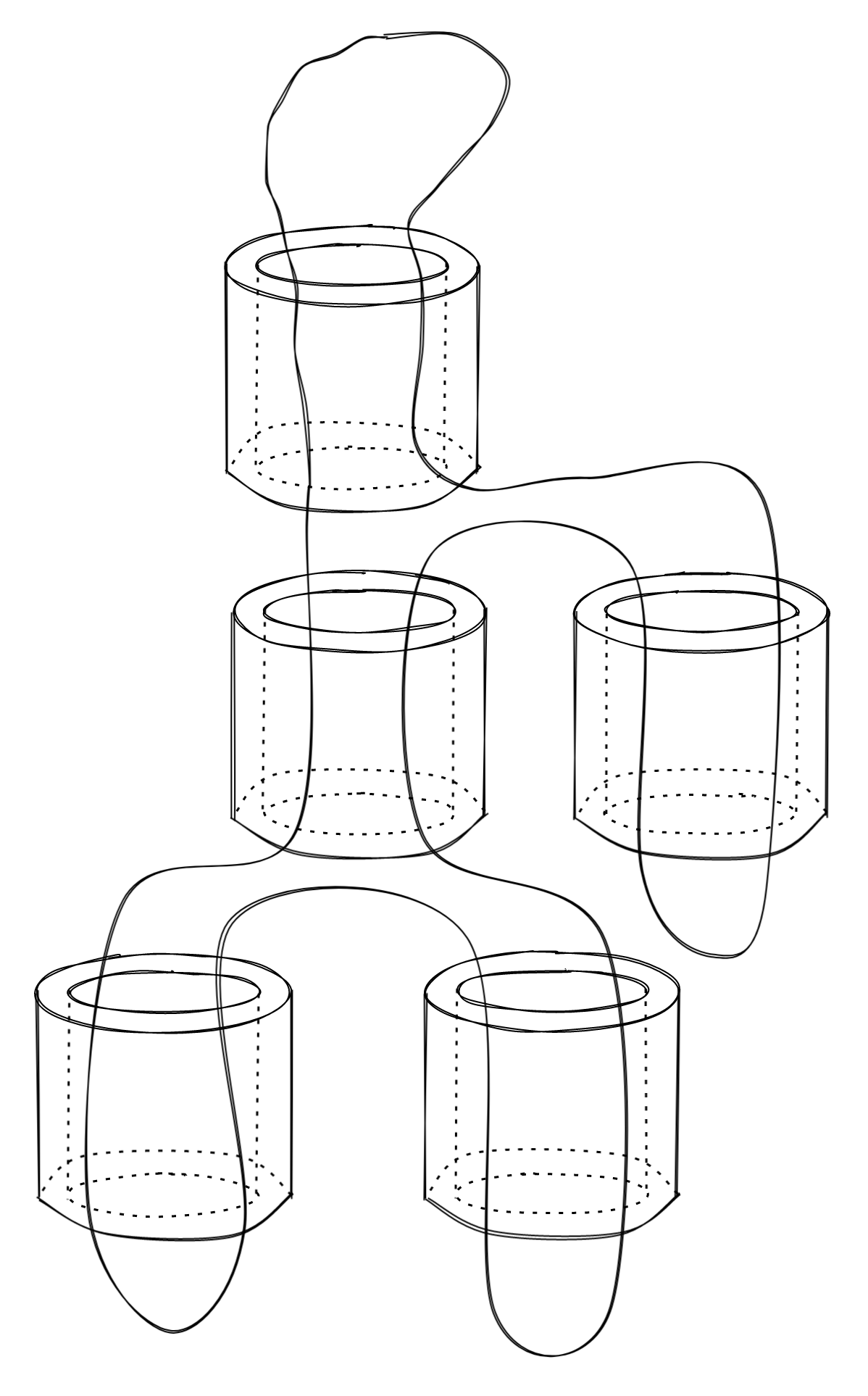 It is not a big step to transform our beads into nodes, and the loop of string into the edges between them. Sean Parent made this discovery many years back, spoke at length about it in a CppCon talk from 2015, and codified it into stlab::forest<T>. The remainder of this article will cover the high-level concepts of a forest, stlab::forest<T> implementation details, and a few examples. The next article will go more in-depth on an example that makes good use of forest.

Every forest has a root node, which is not a node used to store values in the forest. Rather, its primary purpose is as the anchor to which all top-level nodes in the forest are attached. (Going back to our childhood illustration, this is the case where all you have is the string.) Here, we will draw the root node as a rectangle:

The forest’s value type is the node. They are heap-allocated as necessary for storing user data. Each node has exactly one parent, zero or more children, and zero or more siblings. Here, we will draw nodes as circles:

Forest nodes are connected by edges. For every node in the forest, there are always two edges that lead away from the node, and two that lead towards it. Here, edges are drawn as arrows pointed in the direction of forward travel:

It is worth noting that the terms “in” and “out” are relative to $N$. In other words, an in-edge for $N$ will also be an out-edge for some other node.

Forest iterators are bidirectional: although the diagrams are simplified by drawing one-way edges, in reality they are doubly-linked. Forest iterators come in forward, reverse, full order, preorder, and postorder flavors, and all are comprised of two pieces of data:

An iterator pointing to the root node of a forest can be compared to other iterators in the same forest, but cannot be dereferenced.

Utility functions stlab::leading_of(I) and stlab::trailing_of(I) change the edge of an iterator to leading or trailing, respectively. It does not matter what edge the iterator was originally on, and the iterator will still point to the same node. These are free functions, not members of stlab::forest<T>. In this document we will represent these routines in pseudocode as such:

In C++, these calls are straightforward:

begin() and end() in a forest behave just like their equivalent member functions found in a typical standard library container.

Now that we know about nodes, edges, and iterators, there are additional constraints the forest imposes upon its edges that maintain its structure. (Going back to our original illustration, these constraints make sure the string is only fed once through a bead.)

Otherwise, this edge is the trailing out-edge of $N$ itself:

The southeast edge is the trailing in-edge. It originates (is an out-edge) from one of two possible nodes. First, if $N$ is a parent, it comes from the trailing out-edge of $N$’s last child, $C_{last}$:

Otherwise, it comes from the leading out-edge of $N$ itself:

Otherwise, this edge points to the leading out-edge of $N$’s next sibling:

With the fundamental building blocks in place, here is how they combine to form some of the basic relationships in a forest. Note that every node in the forest maintains four relationships with the nodes around it.

The examples also include C++ that would construct the forest in question. If the code does not make sense right now, don’t worry: we’ll cover what’s missing in the following sections. If you’d like, you can skip over it now and revisit it later.

Given a forest that contains only the root node, forest<T>::empty() will return true. Otherwise, it will return false:

The root has a trailing out-edge which always points to its leading in-edge:

This “root top loop” is a unique property of the forest, and is used as a termination case in some traversals. For example, since preorder traversal iterators always point to a leading edge, the end iterator is the root top loop. (Because it is such a specialized implementation detail, the root top loop is often omitted when diagramming.)

f.begin() would work equally well as f.end() in the above case. Like the standard containers, they are equal when a forest is empty.

Many Nodes and Levels

The frequent use of stlab::trailing_of is necessary to insert subsequent nodes as children of the newly inserted nodes. Without flipping the iterator to the trailing edge, new nodes inserted with those iterators would be added as prior siblings, not children.

forest<T>::insert requires an iterator (where to insert) and a value (what to insert). The iterator is never invalidated during an insertion. insert returns a leading edge iterator to the new node.

When the location for insertion is on the leading edge of $N$ (that is, $I$ is {N, L}) the new node will be created as $N$’s new prior sibling. So:

becomes the following. Note that the iterator is unchanged, still pointing to $N$ on the leading edge even after the insertion:

becomes the following. Again, note that original iterator $I$ is unchanged after the call:

The traversal behavior of stlab::forest<T>::iterator is always full order. This means every node is visited twice: first, right before any of its children are visited (on the leading edge), and then again after the last child is visited (on the trailing edge). This behavior is recursive, and results in a depth-first traversal of the forest:

In C++, one might output the above labels with the following code. The exception of course is 7, which cannot be output because it is the forest’s end() iterator.

Here is the same diagram with the leading and trailing edges colorized green and red, respectively:

To output the “color” of the edges, one might write the following:

To traverse a node $N$ and all of its descendants, the iterator range is:

Note this technique does not work if $N==R$. In that case, you’d be traversing the entire forest, so you can use forest<T>::begin() and forest<T>::end().

A preorder traversal of the forest will visit every node once. During preorder traversal, a parent will be visited before its children. We achieve preorder iteration by incrementing full order repeatedly, visiting a node only when the iterator is on a leading edge. Note the use of the root top loop as the terminating iterator for a full-forest preorder traversal:

A C++ implementation of preorder traversal may look like this:

A better solution would be to use the preorder_range utility already provided by stlab::forest<T>:

A postorder traversal of the forest will visit every node once. During postorder traversal, a parent will be visited after its children. We achieve postorder iteration by incrementing full order repeatedly, visiting a node only when the iterator is on a trailing edge:

A C++ implementation of postorder traversal may look like this:

A better solution would be to use the postorder_range utility already provided by stlab::forest<T>:

A child traversal of a node P traverses only its immediate children; P itself is not visited. Child traversal is achieved by setting the edge of the iterator to trailing, then incrementing it:

A C++ implementation of child traversal may look like this. Note that the iterator passed points to the parent whose children we are going to traverse:

A better solution would be to use the child_range utility already provided by stlab::forest<T>:

To iterate just the top-level nodes in the forest, use stlab::forest<T>::root() to get an iterator to the root node:

Like most STL containers, erasing nodes in a forest starts by passing two iterators denoting the range to erase. The rule for deleting forest nodes is this: a node will be erased if and only if the deletion traversal passes through that node twice. The nodes to be erased from the forest are always processed bottom-up. This means that a parent’s child nodes will always be deleted before the parent. It also means that all nodes will be leaf nodes at the time they are erased.

Consider the following forest and the defined first and last iterators into that forest for erasing:

Initially, the iterators are at {B, L} and at {R, T}. The nodes $B$ and $C$ will be deleted because the traversal from first to last will go through each of those nodes twice. Even though the deletion iterator will pass through $A$, it is not deleted because it only passes through on the trailing edge, not on the leading edge:

After the above erase has completed, the resulting forest will be:

Containers should make a developer’s life easier, not harder. When a container type requires you to think about maintaining its validity, it fails to achieve that intent. Forests present one solution to the hierarchy container type that is internally consistent. By maintaining itself, a forest lets you get back to handling the data, instead of the container.

“Enough already,” you cry, “show me the sources!” stlab::forest<T> is maintained as part of the Stlab Library, and is available on GitHub. We also have documentation for the class, as well as utility data structures and forest algorithms.

Foster is a 20-year C++ veteran at Adobe and a Senior Computer Scientist on Photoshop. He is also a contributor to the Adobe Source Libraries and stlab.cc. He can be reached at @phostershop on Twitter.